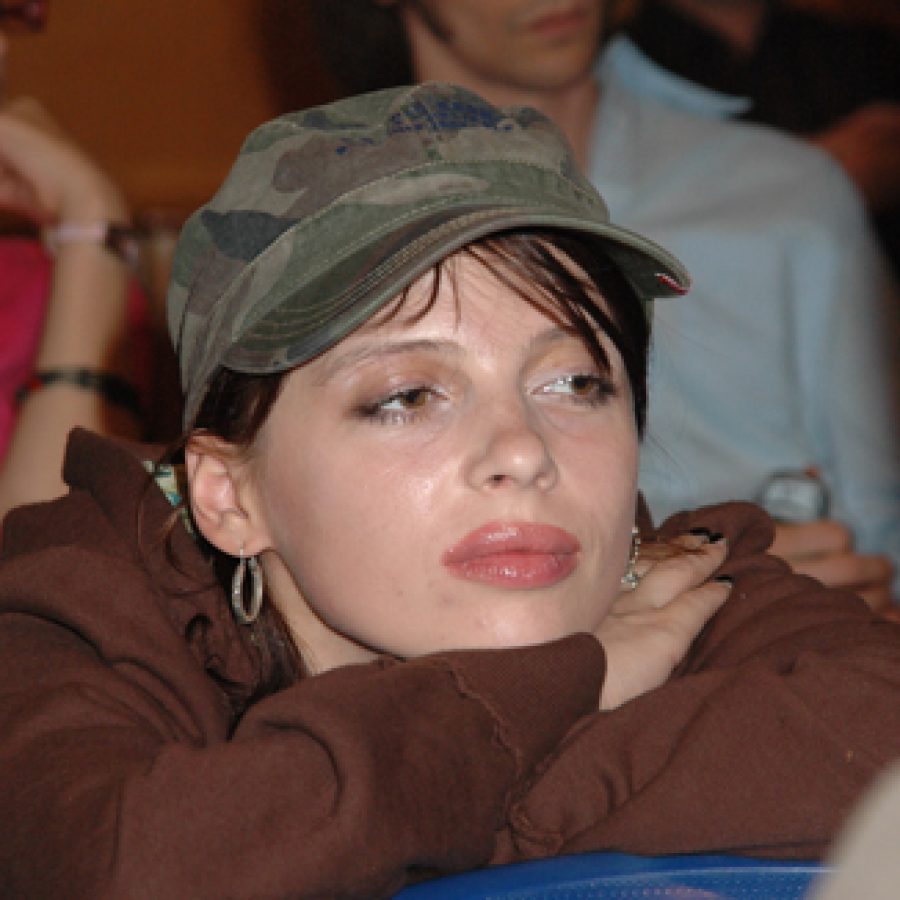 Born on 8 December 1980 in Cherkassy, Ukraine. Moved with the family first to Ivano-Frankivsk, then to the small mountain town of Yaremcha in the Carpathians. Attended a school of Arts with the subject of fine arts. In 1998 entered Kyiv National Linguistic University (French Department) and got her master’s degree in philology in 2003. Masters degree thesis: “Manifestations of the Archetype of the Big Mother in the novels Elementary Particles by Michel Houellebecq and The Double Lion by Yurko Izdryk.”

Since 1999 Irena is the front woman of the alternative music band Factychno Sami (Actually Alone). The band has made a range of non-mainstream videos and published 4 albums. The music is a mixture, ranging from industrial, punk and hard core to psychedelic trip hop.

She won the Grand Prix of the Young Writers International Competition “Granoslov” in 1999. In 2002 she published her first book ”Znes Palenoho. Fiction for Idiots”, containing the novel “50 Minutes of Grass”, and the short stories cycles “Jericho’s Dreams” and “Apologies of a Dead Man”.

After graduating from University she left the Ukraine for about one year and spent the time traveling through South East Asia. That experience is partially described in the book “Freud Would Cry” (Folio, 2004).

In Summer 2006 Karpa tries herself as leading actress in Russian melodrama “Compote”. In the same period she co-works with Ukrainian movie makers as a screen writer for a film “Autism”.

In Autumn 2006 Irena debuted as a movie director during Molodist Festival in Kyiv with a film “Kyiv®. Limited Edition”. In this movie FS music and Irena’s texts were used.

During years 2006-2007 Polish, Bulgarian and Russian translations of “Freud Would Cry” were published.

In January 2007 her latest book “Bitches Get Everything” appeared in Harkiv publishing house “Book Club”.

At the moment she’s working as a free lancer for several magazines and newspapers and her group is on a final stage of work on Ukrainian album ”In Zhyr”.

This is the Queen of political incorrectness and shame­lessness who is trampling over traditional Ukrainian chastity (and European in the same package) with bare little feet of an incurable Lolita… She is the first Ukrainian authoress who visited the very heart of Asia and told us her stories of the unknown world, in our literary language with comments in all foreign languages, the language of gestures, body language, the dirty language, the language of blood, the language of love (Andrij Bondar)

Sometimes my nerves just give up and I circle with my pencil the passages I especially flip over, and with my hand clenched with ecstasy I scribble on the margins of the manuscript: „Bravo Kata!!! Bravo Karpa!!!” (Yuri Andruhovich)

There is no doubt that Irena Karpa – a talented persona and remarkable representative of the last generation of Ukrainian writers which bring to the surface all of those things that lie heavily on our stunned minds: hallucinations, so called physical philosophy, curses, slang, foreign words, etc. This is a generation of young people with broken hearts, completely disappointed, a generation which feels abandoned and finds not even a ray of light – even elevated sentiments become a routine for them. This is because this generation stands gazed into its own soul and, getting dizzy with that perspective, it tries (without embellishments and often very chaotically) to put to worlds the world it lives in. Irena Karpa, among her peers, is the one who does it in the most striking manner. (Vasil Gabor)

In the novel Bitches Get Everything she once again tells us a story “about herself”. Actually she talks, in the first person singular, about a new incarnation of the bad girl we already know from her pre­vious works, the bad girl whose existence in reality is widely believed in among Karpa’s fans and haters. One can nothing but be happy about one thing: both groups are diligent researchers of her musical and literary work. The authoress’s opus really deserves such ambivalent attention and respect. Because Irena Karpa – except for accomplishing strictly artistic tasks, strikingly and productively like nobody else, plays the role of a cultural provocateur Ukrainian society in general is in such a dire need of. (Oleksander Krasjuk)

A word is an instrument for Karpa, an instrument she uses to paint her affairs and adventures, deliberately avoiding cliches in order to underscore her detachment and independence. This book provides an opportunity to follow the development of a very interesting personality. It will be interesting for all of you who value freedom. (Hustochka, Estethic Education)

Here we have a compound (and a very natural one for that matter) of a lot of things I like and those I hate – both in belles-lettres in general and Irena Karpa’s novels in particular… There are a lot of things I really can’t stand. But, together with them, there are great many words and thoughts I’d like to consider mine… There are some more episodes here… I’d like something like that to happen to me… (Polozhynsky)

Irena Karpa, a musician and a writer, who has succeeded in capturing the hearts of young literary audiences in record time, offers a completely different kind of prose. She has gained a massive popularity with the novel Freud Would Cry (…) The young author offers to the readers a combination of love story and journal, a mixture of different discourses and genres. You can get to know exotic places with the narrator (the book features pictures from Irena Karpa’s travels), and it keeps you interested; you will also learn about her tempestuous life and fatal love affairs (it goes without saying that her heroes are no ordinary fellows). The narrator belongs to the well-known group of the good bad girls – she swears regularly, which by no means stops her from reading clever books and often quote from them. For example, there is a place where she remembers The Encyclopedia of the Dead by Danilo Kiš, and another where she surprises older generation of readers with her statement that she loves the conclusion by Milorad Pavić that all happy families are similar, while all unhappy ones are unhappy in their own way. And it should be no surprise for me if some young admirer of Irena Karpa stays under an everlasting impression that Leo Tolstoy had nothing to do with it. (…) You can either like or dislike this kind of literature, but there it is anyway and people read it, which means it serves as a step on the ladder to the literature of the future. The young people’s desire to recognize themselves in book heroes, their need to identify with heroes, the fact that a literary world can easily be understood – all these result in an explosion of books with autobiographical elements, often written in the style of ”blah- -blah-prose”. Is it a result of saturation with works by post- Modernist authors which until recently were the main­stream of Ukrainian literature or a counterpoise to books with romantically underscored national idea which are still numerous and close to heart of a group of Ukrainian critics? The work of the youngest generation of Ukrainian prose writers offers interesting material for the study of the poetics of this generation which could be named post- post-Modernist, and also for the forecasts critics make in regard to the direction the early 21st century Ukrainian literature will take. (Ala Tatarenko)