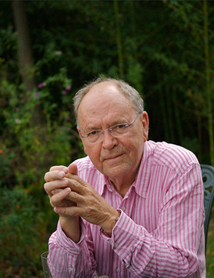 Novelist Christopher Hope was born in Johannesburg, South Africa in 1944. He was educated at the universities of Witwatersrand and Natal and worked as a journalist before moving to London in 1975. He is a regular broadcaster and contributes articles and reviews to newspapers, magazines and journals. He has also written plays for both radio and television.

His poems were first published in Whitewashes (1971), but Hope’s first significant publication was Cape Drives (1974), which won the Thomas Pringle Prize and a Cholmondeley Award. His published poetry also includes In the Country of the Black Pig (1981) and Englishmen (1985).

His first novel, A Separate Development (1981), was banned in South Africa. A rich, comic satire of the apartheid system, it won the David Higham Prize for Fiction. His other novels include Kruger’s Alp (1984), which won the Whitbread Novel Award; The Hottentot Room (1986), set in a London drinking club, a home from home for South African exiles; and My Chocolate Redeemer (1989), the story of an unlikely friendship between a 15-year-old girl and an exiled dictator. More recent novels include Serenity House (1992), a black comedy set in an old people’s home in London, shortlisted for the Booker Prize for Fiction; Darkest England (1996), which subverts the colonial experience through African explorers visiting England; and Me, the Moon and Elvis Presley (1997), a satire set in the new South Africa. His most recent novels are My Mother’s Lovers (2006), and The Garden of Bad Dreams (2008).

Hope’s non-fiction includes a volume of autobiography, White Boy Running (1988), a travel book, Moscow! Moscow! (1990), which won a PEN Award, and, most recently, Signs of the Heart: Love and Death in Languedoc (1999), about his home in the South of France. Brothers Under the Skin: Travels in Tyranny (2003), is a biography of the Zimbabwean dictator Robert Mugabe.

Writing has always seemed to me to be a rather mischievous occupation. I write not to change the world but to undermine it, since the models on offer seem pretty dull most of the time. Much of life is odd and disorganised. Many people who pretend at being certain about things are either ingenuous or wicked. They are also often charlatans. One wants to record their utterances, wherever possible, as a warning to others. As a writer I was lucky enough to grow up in South Africa, a place where the lethal folly of what everyone assured me was ’normal’ life far outstripped even the most audacious of writers. It made for a wonderful training. It taught me about the sheer inventiveness of life. And it gave me a subject – the triumph of power and the terminal comedy of those who wield it.