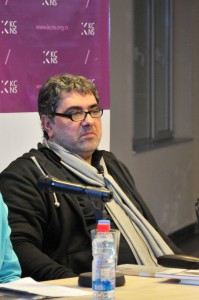 Jovan Nikolić  was born in 1955 in Belgrade, and as a child of a musician he lived in all cities of former Yugoslavia. In 1963 the family Nikoli
returned to Čačak, where they originate from. From 1981 Jovan Nikolić  lived in Belgrade, where he worked as a freelance journalist in several media, a columnist, actor, cabaret performer and singer at nightclubs.
He has authored the following books: Gost niotkuda (A Guest from Nowhere, in Serbian and Roma language, 1982) Đurđevdan (The Day of St George, 1987), Neću da se rodim (I Don’t Want to Be Born, 1991), Oči pokojnog jagnje­ta (The Eyes of the Late Lamb, 1993), Telo i okolina (Body and Environment, 1994), Mala noćna muzika (Little Night Music, 1998) Soba s točkom (The Room with a Wheel, 2004, German edition, 2011 in Serbian). He has written texts for the groups Generacija 5, Zabranjeno pušenje, Ođila and musician Radomir Mi­hai­lović Točak … The latest lyrics by Nikolić, Bubamara, is a leitmotif of the film Black Cat, White Cat directed by Emir Kusturica.
After the NATO bombing, Jovan Nikolić moved to Germany, where he continued to write and publish, and his work finally got him recognitions: in December 2011 everybody in Cologne read Jovan Nikolić’s novel Bela vrana, crno jagnje (White Crow, Black Sheep), which was selected within the project A City Book. This respected recognition was established in 2003 by the Culture House, and Nikolić’s third book was published in 2006 in German, and reprinted in 10,000 copies and read for seven days in about thirty places around the city of Cologne at a reasonable price. This Cologne