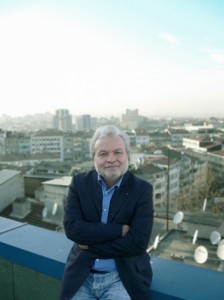 Nedim Gürsel (1951) is an eminent Turkish writer and intellectual whose extensive and diverse literary opus has gained followers in more than twenty countries all over the world. He graduated from the Sorbonne’s Department of Modern French Literature, where he also earned his PhD by defending a comparative thesis on French and Turkish poetry. He teaches Turkish Literature at the National Institute of Oriental Languages and Civilisations in Paris (INALCO). He leads a scientific research project dedicated to Turkish literature at the National French Science Research Centre.

He has received a number of Turkish and international literary awards – the Prize of the Turkish Language Academy (1976), the Abdi Ipekçi Peace Prize (1986), the Freedom Award by French PEN Club (1986), The Haldun Taner Citation for Story (1987), the Struga Gold Plaque Poetry Award (1992), the prize for best story by Radio France Internationale (1992), Chevalier of the French Order of Arts and Letters (2004), The World Brotherhood Prize ‘Mevlana’ (2009).

His novel The Daughters of Allah won him the Prize for Freedom of Thought and Expression in 2009, awarded by the Association of Turkish Publishers, and he has received the International Literary Award Balkanika for the novel Satan, Angel and a Communist (Şeytan, Melek ve Komünist).