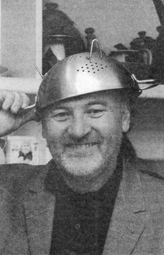 Lojze Wieser (1954) is a publisher, writer and translator. His publishing house Wieser Verlag, promoting literature of Southeast Europe for two decades, has published over 800 titles. The editions Europa erlesen (To Read Europe) and Wieser Enzyklopaedie (Wieser Encyclopaedia) have earned a cult status.
He has received the ’Dositej Obradović’ Prize awarded to a foreign publisher for a continuous and clear contribution to the promotion of our literature (2007).
He lives in Klagenfurt and Celovec.