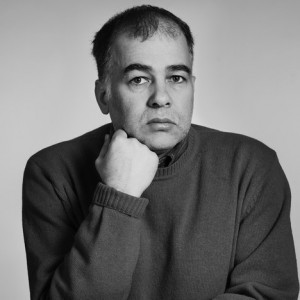 Vladan Matijević  was born in 1962 in Čačak. He worked for eighteen years at the factory of base chemistry, and since 2005 he has been employed at the Gallery of Nadežda Petrović  in Čačak.
He has published nine books, majority of which have had several editions, some being translated into French, German and Spanish. Some of his stories have been translated into as many as ten languages of the world, while his drama Udarna igla (The Striker) has been translated into Russian. He lives in Čačak and is a father of two.
He has published:
Ne remeteći rasulo (Without Disturbing the Chaos, poetry, 1991) Van kontrole (Out of Control, novel, 1995) R. C. Neminovno (Unavoidable, novel, 1997) Samosvođenje (Self-reduction, poetry, 1999) Prilično mrtvi (Rather Dead, stories, 2000, Andrić Award) Pisac izdaleka (A Writer from Far Away, novel, 2003, NIN Award, the awards Golden Hit Liber and Golden Bestseller), Časovi radosti (Moments of Joy, novel, 2006) Žilavi komadi (Tough Plays, dramas, 2009) Vrlo malo svetlosti (Very Little Light, novel, 2010, awards Meša Seli­mović, Borisav Stanković and Isidora Sekulić).