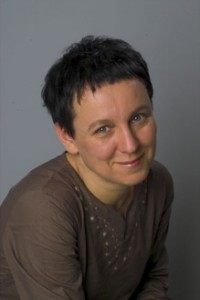 Olga Tokarczuk (1962) is one of the most eminent contemporary Polish prose and essay writers. Born in Sulechów, a psychologist by education, she lives and writes in Krajanów, a small place in the Sudetes Mountains. She has received prestigious literary awards: the Polish Publishers’ Association Award, the Kościelski Foundation Award, passport of the Politika newspaper, the Mahinera Award, the Silesian Culture Award in 2003; she has had many nominations for the NIKE Award and three times won the Gazette Viborce readers’ poll. She has been shortlisted for the International IMPAC Dublin Literary Award in 2004.

Olga Tokarczuk debuted in 1989 with a poetry collection Miasta w lustrach (Cities in Mirrors). A great success came with her first novel Podróż ludzi księgi (The Journey of the People of the Book), which was met by great critical and public acclaim, followed by the novel Erna Eltzner (E. E., 1995) and the 1996 release of Prawiek i inne czasy (Primeval and Other Times), the book which earned her the highest recognitions. After the story collection Szafa (The Wardrobe, 1997), came the novel Dom dzienny, dom nocny (House of Day, House of Night, 1998), which is considered to be her best work by many, and finally, in 2001 the story collection Gra na wielu bębenkach (Playing Many Drums). After that she published the books: Anna w grobowcach świata (Anna in the Catacombs, 2006), Prowadź swój pług przez kości umarłych (Drive Your Plough through the Bones of the Dead, 2009) and Moment niedźwiedzia (The Bear’s Moment).

The 2000 book of essays Lalka i Perła (The Doll and the Pearl) deserves to be mentioned (as a suggestion on the new reading of the novel The Doll by Bolesław Prus), as well as Opowieści wigilijne (Christmas Tales, with Jerzy Pilch and Andrzej Stasiuk).

Olga Tokarczuk is a writer of particular sensibility. She succeeds in making a connection between the macrocosm and microcosm of our spirit in an inspiring way, and for her, there is simply no world existing outside our consciousness, just like consciousness cannot be separated from the eternal rhythms of Nature and Self. Olga Tokarczuk is, besides Adam Zagajewski and Tadeusz Różewicz, the Polish Nobel Prize candidate.

About the novel The Journey of the People of the Book

(…) The authoress, with sovereignty, demonstrates knowledge of different types of statements and a skill of composing them into one whole, as well as an ability to design an intriguing plot and interesting literary heroes, with a substantial cognitive reach. Without doubt, the novel is built on a postmodernist base, which does not reflect reality but plays with the world of literature.

About the novel House of Day, House of Night

The latest book by the Polish authoress is an exemplary case of breaking logocentricity. House of Day, House of Night is a novel based not on the requirements of coherence and consistency of the narrative-motivational unity, but a series of independent fragments (which, as we know, the ‘great story’ of the past has turned into). These fragments are kept together by several common characters and a loose narrative link. The novel’s essential orientation – also close to a postmodernist’s heart – is the sphere of dream, always valued more than the sphere of reality – all the way to the denial of matter, oscillating between Htonos and Chaos, creation and the void. The readers who liked Milorad Pavić, Nemanja Mitrović and Goran Petrović will find in Olga Tokarczuk a follower of postmodernist poetical oneirism, but she adds to this pattern the vision of a relationship between creation and nothingness as an innovation.

The fragments usually speak about an event, a reflection of which is in a virtual world, on the website that records dreams. If the segments do not refer to dreams, they will address other intangible spheres of the being (the past, writing or nature, embodied in a landscape of such sensory vividness that they also penetrate the shell of reality). Different forms of the unreal dimension of existence are associated to the material world by means of humour or bizarre banalisation. Humour, which is also a kind of distance, points to the cracks on both poles, while the encounter with the naked reality suggests that – although the dream is our ontological and existential contexts – the concrete reality should not be annihilated. The poles can only exist in a balance which, however fragile it might be, alike the relationship between Htonos and Chaos, makes the world possible and whole.

The reflexive foundation of this novel’s vision is the thesis that there is no world – as Calderon taught us – outside a dream. It is produced – as Olga Tokarczuk suggests – by people who died and are now dreaming their new lives. It consists of the life Dis fell into, never to accept its limitations, never to renounce his astral origin. The human yearning for distant worlds is the same as the yearning for those worlds they came from, that is, for immortality. The yearning for immortality, disguised in a literary play, explained as an effort to tell the truth, therefore, does not seem as something already seen. Stepping out of herself into some other bodies and other souls, the writer accurately depicts what she has seen through this paradoxical realism.

You could not have been expecting the brilliance of postmodernist play without the prolificacy of paradox, which is always ready to show us the way to some new world.

About the book Playing Many Drums

Olga Tokarczuk’s heroes are ordinary people, ‘walking indefinities’ in a hostile (vast, incomprehensible) world. Marked (wounded, damaged) by their environment (the soc-realistic city – prison), they, as if under a spell (course), attempt to overcome humiliating family and social circumstances and become wholesome (beautiful, dignified, unique). For this reason, their (flat) reality is illuminated (and disguised) by a subconscious understanding (acceptance) of the world: embroiled in the menacing atmosphere of the carnival (of a personal or historical war), which erases the border between the reality and an image, idea and shadow, they are trying to reconcile the urban and primordial, the male and female, the human and superhuman, inside their own beings. However, entrapped by linear time order, the adopted androgyny is more morbid than ethereal (‘Glacinia’), the magical power of words is more fatal than healing (‘Open Your Eyes, You Are No Longer Alive’), personal determinedness starts to resemble ‘finality’ (‘Subject’), and between a need for loneliness (‘Che Guevara’) and a Robinsonean agony (‘The Island’, ‘Professor Andrews Goes to Warsaw’) there is no ‘middle ground’; subject to animal instinct or demonic apathy, the heroes suspect that the inhuman (loveless, empty) resides in their own selves, in Man, and that the mutants (de)generated by nature (of everything visible and invisible) are disturbing avatars of the road to the ‘heart of the secret’, to immortality. Each hero, plugged into the (drumming, primary, unspoilt) rhythm of the universe, whose fallen, astray particle he is, is a character with at least two sides who remains an unexplored, desert island.

Revealing elementary forces in the drama of humanness, mixing pure evil with the light, these stories are both tender and brutal; Olga Tokarczuk sees in transcendence nothing that could be friendly to man.

About the novel Runners

This is a kind of novel that is written only once in many years and is remembered still when many books along the way are already forgotten. Although written by a Polish authoress, this novel has no national, temporal, generational, thematic or genre limits. I would offer it for a serious reading to very good contemporary writers too, when they are not reading their own or their friends’ literature.

The novel Runners is a literary monograph of the dynamism, motion, restlessness of a traveller. The world of contemporary Runners is a world of permanent travellers who have their products, travellers’ cosmetics, their own language: simple, functionalised English, even their own, travellers’ psychology. The discontinuous and quivering contemporary world has reanimated in man the atavist, nomadic desire satisfied by travelling. Moving, changing places, discovering new spaces enable a kind of a peek under the underlining of the world, a look through the curtain hiding the unknown and the unspeakable which is left ajar. Against the backdrop of an ancient orthodox sect, a universal story about human destinies has been constructed: so we get to know about the life of sailor Eric; ambitions of doctor Blau, who wants to eternalise parts of the body; the case of Kunitski and his wife, who mysteriously disappears; Anushka, who leaves her home and family to roam the routes of the Moscow underground trains; Philip Verheyen, the 17th century Flemish anatomist; or the drama of Josefine Soliman, who seeks to have her father’s remains properly buried.