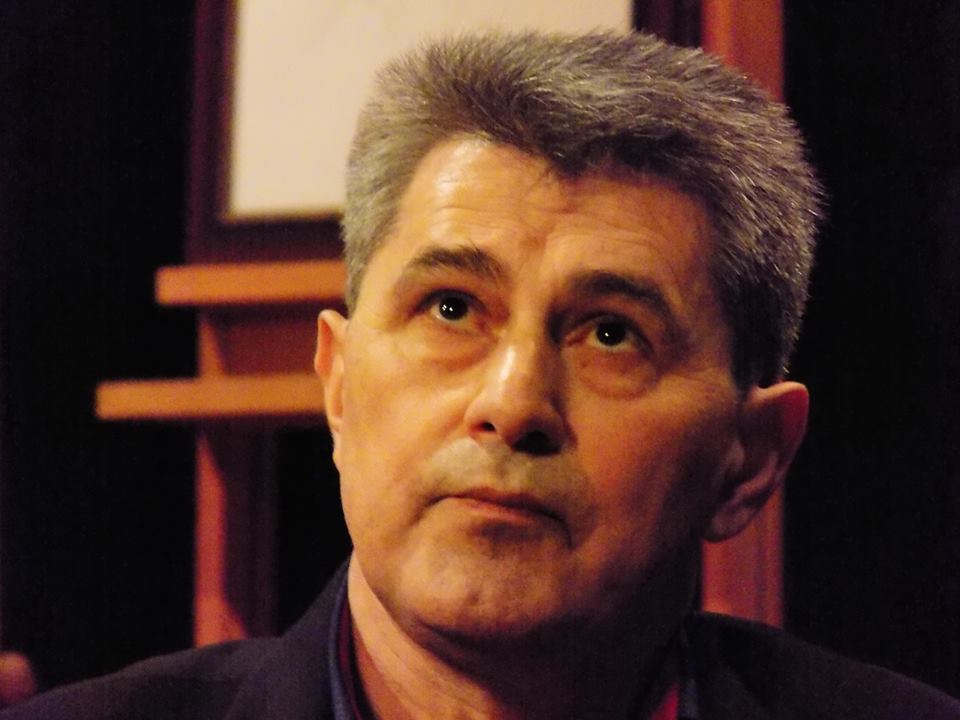 MIRKO DEMIĆ was born in 1964 in Gornji Klasnić near Glina.

In addition, he has published a book of essays, (re)views and marginalia Pod otrovnim plaštom (Under a Poison Cloak, 2010) and Na ničijoj zemlji (In No Man’s Land, 2016), as well as a book of journalistic texts Slađenje gorčinom (Savouring Bitterness, 2008). With Bojan Jovanović he has co-authored the book Čitanje proročanstva (Reading a Prophesy, 2011).

The book of stories Molski akordi has earned him the “Andrić Award” (2009), the novel Trezvenjaci na pijanoj lađi the “Dejan Medaković” award (2011), and the novel Ćutanja iz Gore the “Meša Selimović” award (2017).

Demić was given the 2013 “Đura Daničić” award for his contribution to the development of librarian and information work and culture in the Republic of Serbia. Parts of his novels, his stories and essays have been translated into English, German, Polish and Ukrainian. The book of stories Molski akordi has been translated into Macedonian (2011). From 2002 to 2011 he was the editor-in-chief of the literary magazine “Koraci” (Steps) and is a member of the Serbian Literary Society. He lives in Kragujevac.

About the book Ćutanja iz Gore (Silences from the Mountain)

Demić’ novel is a successful modernized novel-phantasmagoria of Peter’s Mountain between myth and reality, between the archaic and the modern.

The book by M. Demić is not an example of a clear genre. The dramatic reason for the fictional binding of fragments lies in the centennial flow of silence to the point of finding out what had been going on with Peter’s Mountain and its people from ancient to recent times. This great work of fiction is characterised by mastery in “weaving” pro et contra, a feeling of historic turning points affecting the men of the Mountain, and a vividness of language and the refined style of M. Demić.

The book by M. Demić is a phantasmagorical-symbolic novel, therefore, an interpretation of high abstraction, an interpretation whose both occasion and message are, however, quite specific: the occasion, only alluded to, is the recent wars in our region, and political conflicts as both their cause and consequence, while the explicit message is a cynical apocrypha, the ultimately bitter existential experience that can hardly be said out loud.

Demić’ hero, the prophet Dijaković, comes from primordial times, and from his own self testifies to the resurrection of the Book as a universal crypto-text of the world. From an archeparadox to a post-mortem speech, Demić weaves a wise, spiritual story about muteness, unrest and quietness.

Peter’s Mountain, a mountain in Croatia, is depicted in Demić’ phantasmagoria as a complex space, which spreads its leaves in several ways: historically, culturally, metaphysically, mythologically… Silence is a sophisticated descent through human, personal and general memory, through old languages, into the depths of the general and personal oblivion.

“Ćutanja” is a crown of Demić’ pentalogy dedicated to exile and a nostalgic retrospect of the homeland. The author has masterfully conducted a formal triple twine made of a narrative about Peter’s Mountain as a historical-political topos and spectral emanations of folklore fiction.

The latest novel by M. Demić is the last volume in a pentalogy thematicizing complex Croatian-Serbian relationships in the writer’s home place. The sophisticated language of the writer and his meticulously sought and found narrative procedure set this book apart and raise it to a higher level in comparison to the majority of this year’s novels.

The phantasmagorias of M. Demić, the head-spinning dive into the archetypical, mythical, daydreaming, deeply ours, is yet another anthological novel in a series we have been presented with by one of the best novelists we have had.

M. Demić, in the phantasmagorical book, twining the mythical-biblical and actual, follows the destiny of Serbs through centuries, while at the foot of Peter’s Mountain there is a constant skirmish between the soul and the body, sanity and insanity, the timeless and the eternal.

The complex novel by M. Demić knots together, on a single historic spot, several civilizations, cultures, nations, beliefs, as well as meditative interpretations of silence and the name of Peter (of the mountain and of the King), which are both in synergy and contradiction, just like life is outside one’s country of origin, in general and everywhere.