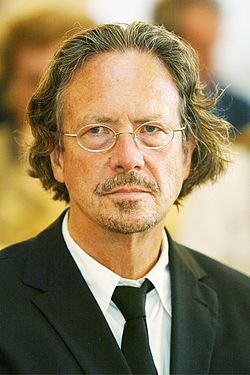 Born on 6th December 1942 in Griffen, Carinthia, PETER HANDKE spent his earliest childhood in his birthplace, moving to Berlin in 1945 with his family, into the part of the city under the USSR control. In June 1948, immediately before the blockade of Berlin, the family of four left the city, crossing the Austrian border illegally, and returned to Griffen. He went to primary school there, and to Catholic-Humanistic Grammar School (1954-1959) in Tanzenberg, where he started publishing his first literary works. He continued his education in Klagenfurt, where he won a prize in a 1959 student literary competition. In 1961 he started law studies in Graz, but after his first novel was published (The Hornets, Die Hornissen, written during a holiday on the island of Krk in 1965), he abandoned his studies to become a freelance artist.

During his studies he was actively engaged in writing, forging his distinctive literary style, which became his trademark in the decades to come. At that time Handke showed great interest in cinema and theatre, so he occasionally acted as a screenwriter, director, film festival reporter or jury member. At the very offset of his career (the novel The Hornets was followed by the drama Offending the Audience (Publikumsbeschimpfung)), Handke appeared as a kind of a rebel who opposed individual institutional worldviews, or institutions as such (speech at the meeting of Group 47 (Gruppe 47), which gathered great names such as Heinrich Böll and Günter  Grass, in Princeton, USA, when he called the German literature of that time inane, boring, idiotic and accused it of being descriptively impotent), which brought him glory and earned him a position of a cult writer of the Beat Generation. In 1967 he was awarded the Gerhart Hauptmann prize, the same year when his title Kaspar was published, and two years later he was a co-founder of the Frankfurt Writers’ Publishing.

The period between 1971 and 1978, which he spent mostly in Paris, began with a family tragedy, his mother’s suicide, which he wrote about in A Sorrow beyond Dreams (Wunschloses Unglück). The milestone book, which earned him a place on the international literary scene, was the 1970 novel The Goalie’s Anxiety at the Penalty Kick (Die Angst des Tormanns beim Elfmeter), where he masterfully describes the anxiety of an individual, his feeling of being lost in the contemporary world, depression and the horror of cold-war Europe and a bourgeois Austrian province. The book became mandatory reading in schools, and German director Wim Wenders made a film of the same name after it. The collaboration between the two artists was crowned with Handke’s screenplay for the anthological film Wings of Desire (Der Himmel über Berlin).

After a long stay in different European cities, Handke returned to Austria in 1979 where he lived until 1987, with shorter breaks. In the meantime, he published a number of titles: The Lesson of Mount Sainte-Victoire (Die Lehre der Sainte-Victoire), A Sorrow beyond Dreams (Wunschloses Unglück)… and received the awards Peter Rosegger, Georg Büchner, Schiller‘s Prize of the city of Meinheim, Culture Prize (awarded by the Province of Carinthia), two Literary Prizes (awarded by the cities of Salzburg and Bremen)… From 1987 to 1990 Handke travelled all over the world, which is the topic of his book Travelling Yesterday (Gestern unterwegs), which offers a deeply reflexive picture of nature and the world’s beauty and the meaning given to them by man through his experience and thinking.

Since 1990 Handke has lived in Chaville near Versailles. He has continually been writing and publishing, among others: Slow Homecoming (Langsame Heimkehr), Walk about the Villages (Über die Dörfer), The Dreamer’s Farewell to the Ninth Country (Abschied des Träumers vom Neunten Land ), A Journey to the Rivers: Justice for Serbia (Eine winterliche Reise zu den Flüssen Donau, Save, Morawa und Drina oder Gerechtigkeit für Serbien), A Summery Addendum to a Winter’s Journey (Sommerlicher Nachtrag zu einer winterlichen Reise), Voyage by Dugout ( Die Fahrt im Einbaum oder Das Stück zum Film vom Krieg), Asking through the Tears: Belated Chronicle from two Crossings through Yugoslavia During the War, March and April 1999 (Unter Tränen fragend. Nachträgliche Aufzeichnungen von zwei Jugoslawien-Durchquerungen im Krieg, März und April 1999), Once Again for Thucydides (Noch einmal für Thukydides), Don Juan – His Own Version (Don Juan (erzählt von ihm selbst)), Underground Blues: a Station Play (Untertagblues. Ein Stationendrama), The Innerworld of the Outerworld of the Innerworld (Die Innenwelt der Außenwelt der Innenwelt), The Cuckoos of Velika Hocha, an intimate reportage of a Serbian enclave in Kosovo (Die Kuckucke von Velica Hoca), The Account of Dragoljub Milanović (Die Geschichte des Dragoljub Milanović), The Moravian Night (Die morawische Nacht)… As a novelist, storyteller, poet, dramatist, radio drama writer, screenplay writer and translator, he has published about 60 books and about 30 translations from English, French, Old Greek and Slovene. Apart from the Nobel Prize, he has won all the major literary awards. In protest for the 1999 bombardment of Yugoslavia, he returned the Büchner Prize, and in 2006 he refused to accept the Heinrich Heine Prize awarded by the city of Düsseldorf, because of political pressure on the jury members to change their decision.

Among his recent awards are: ,,Vilenica”, ,,Franz Kafka”, ,,Zigfrid Unseld”, ,,Ibsen” (which is considered equal to the Nobel Prize in the field of dramatic literature), ,,Wuerth “- Prize for European Literature…

He holds the title of a Honorary Citizen of the City of Belgrade and a Golden Medal for Merits of the President of Serbia.

Handke has been an international member of the Language and Literature Department of the Serbian Academy of Sciences and Arts since 1st November 2012.

Handke became the enfant terrible of the European avant-garde, denouncing all social, psychological and historical categories of experience as species of linguistic fraud. But [he] has aged well and now… is regarded as one of the most important writers in German.

There is no denying Handke’s wilful intensity and knife-like clarity of emotion. He writes from an area beyond psychology, where feelings acquire the adamancy of randomly encountered, geologically analyzed pebbles… The best writer, altogether, in his language.

Imagine a cross between Holden Caulfield and Bertolt Brecht, and you’ll have a sense of the Austrian novelist, playwright and screenwriter Peter Handke, whose alienation from the phony and harmful adult world is as pure as his aesthetic purity is purposefully alienating…As it happened, Handke ended up writing social criticism with a vengeance…though to some degree time-bound tales of angst, have a pained, mysterious beauty. Their alluring tension lies in the little war they prosecute between eloquence of expression and rage at the loss of meaning.

Peter Handke made his reputation as an important writer with a fierce, icy set of plays and novels: Offending the Audience, Kaspar, The Ride across Lake Constance, The Goalie’s Anxiety at the Penalty Kick and Short Letter, Long Farewell. Oblique yet startlingly immediate, these works embodied in fresh fictional and dramatic forms concerns that seemed particularly postmodern, notably an obsession (indeed, a disgust) with the way language itself defines and constricts human possibilities.

One of the most original and provocative of contemporary writers.

In power and vision and range, Peter Handke is the most important new writer on the international scene since Beckett.

His prose is reminiscent of the writings of Henry James…a passion for understanding, for grasping the tortured complexities of contemporary life.

About the novel The Moravian Night

Peter Handke commands one of the great German-language prose styles of the postwar period, a riverine rhetoric deep and swift and contrary of current.

A searching exploration of how travel and storytelling can help us find our truest selves.

The renowned Austrian novelist looks back on a body of work and a terrible century in this elegiac tale…  Some of Handke’s text is a kind of meditation on history… And some is simply lovely… Stellar.

In just about a hundred pages, this novel (Don Juan) offers more excitement and insight than many a book larger in volume and in author’s ambition. We are presented with an unpretentious work of a master-writer which can really be read in as many ways as there are readers. After all, a reader is the very person who wants to be seduced – by a story. And a story is also a form of power.

Indeed, “Travelling Yesterday” is a book for slow reading, for reflection, a book that requires time for introspection. It testifies to an attempt to catch the very moment of everydayness that is the first to elude us, although it is always closest to us: “Before a sight of distance, I came to myself.”

Peter Handke holds literary style above everything. For this reason, reading his fiction is a delight for people who have the highest demands from literature. Secondly, equally important: Peter Handke is a writer who inspires change with each new, subsequent book. He insists on changes in form, on the use of the right, appropriate form. This is what the books I hinted at say. None of them is without aberration in regard to form.

An unusual autobiographical account, associated by its title, and not only the title, to our part of the world. A writer who has seemingly abandoned the profession makes his confession to six of his friends on a ship-hotel called The Moravian Night. More precisely, he lets them be his confessors, lets them remind him of the landscapes, situations, encounters, details and people from his earlier books and the circumstances that followed him… A sworn loner, in a dispute with the spiritual and social climate of the western world, he has found in our part of the Balkans an environment that suits his state of mind, his need to see things outside their commonly accepted frame, from a perspective of a free individual broken away from social conventions. He has established a kinship to our, equally lonely country, excluded from the world: by understanding his own self, he understands and accepts us.