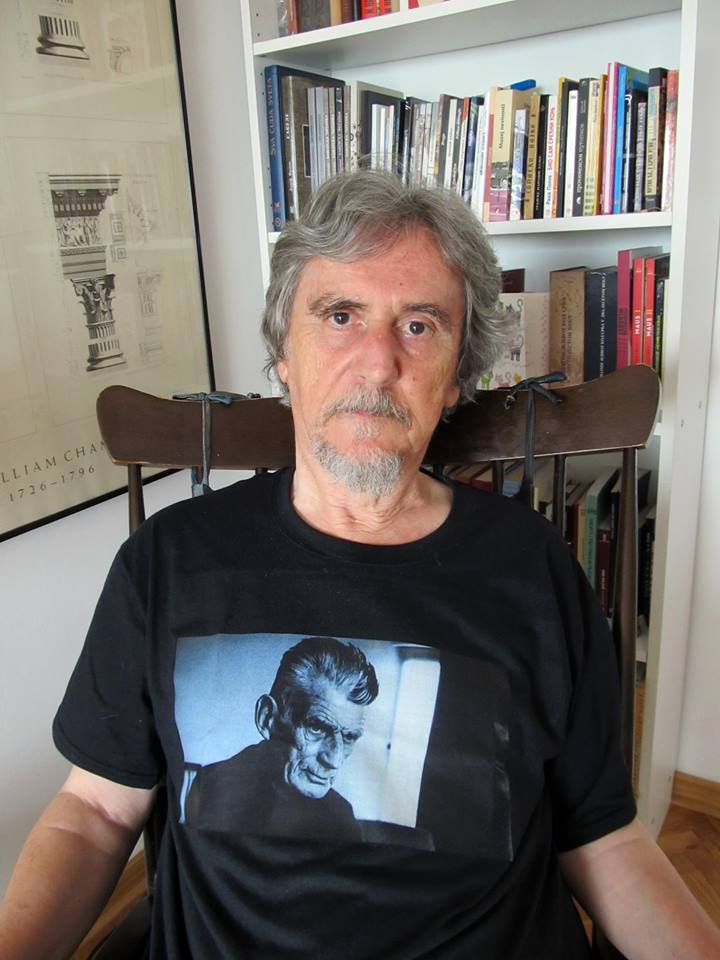 Radivoj Šajtinac was born on 1st March 1949 in Zrenjanin. After finishing comprehensive high school in his hometown, he studied General Literature with Theory of Literature at the Faculty of Philology in Belgrade. He is a member of the Serbian Literary Society, the Association of Writers of Vojvodina and the Serbian PEN. He was a co-founder of the magazine for literature and culture Ulaznica and its Editor-in-Chief for two decades.

He writes poetry, prose, literary and art criticism; he is active in dramaturgy, and translates from Russian and English.

He has won the award of the magazine Mladost (1969) and the October Award of the Town of Zrenjanin.

His novel Victims of the Biedermeier was published in English within the Serbian Prose in Translation Edition of Geopoetika in 2012. The second edition of this novel was published in 2015 by the American publisher Blooming Twig Books, New York.

Although there is a certain sense of distance from characters and events, the latent pain and suffering for both the loss of the brother, that is, the family, and people in general, is brought about by the autobiographic facts that emerge from this extraordinary and inspired prose.

This novel by Radivoje Šajtinac is, overwhelmingly, a prose codified by one’s own ontology, the inner being of the story that flows over the boundaries of the genre and mimetic determinations… In the network of meanings created by Šajtinac between the book covers, words and terms are not just mere signs, but nodes of meaning (Lacan) in which the novel becomes a distinctive and original crystal picture of life and its materialization.

Radivoj Šajtinac moves confidently through the illusion of two timelines, and the search for the information about the life of the greatest Serbian painter of the Biedermeier era, Konstantin Danijel, and his lost paintings is also the remaining foothold upon which hangs the rest of the life of a retired archivist of a Banat town, shaken by the blows brought about by the passage of time, illness and the echoes of the unexplained death of his brother in New York. Nevertheless, Šajtinac builds discreetly, without being pathetic, a world made of reality that melts into an illusion, dissolves in the light of Daniel’s paintings.

… the way Šajtinac speaks of his own re-learning to urinate, to walk, to talk, the power with which he manages to ironize his own position that puts him in a purely biological sense in an incredibly subordinate position, the way he manages to find his vital sap in the “magical pool” of a spa resort in Banat and, finally, the way in which he keeps his moral high ground and purity in his reflecting upon nature and individual and collective narratives, is what makes this book, besides the works of Milan T. Djordjević, unique on our literary scene, both by the fact of his experience and by the literary power used to transpose this experience into supreme art.

Reports on a personal and universal being, diseases, states, reflexes of individual mythology. Magic of the native landscapes, auto-reflexions, dialogues with persons, models, defeats, hopes, anti-odes, mirror games with oneself and the fatalistic images of the world, home-family circles, the author’s merciless auto-critical recapitulation, parables, paradox, introspection, eschatological forebodings and images of the twilight of nature.

The inter-textual layer of the structure is built by Šajtinac through quotations, reminiscences, allusions, associations. The inter-textual connections are also circular, threads of the cyclicality of time; they are involved in characterization of characters and the dissolutions of objective reality, as well as a concrete, real space. The rich stratification relies on the writer’s implicit poetics, skilfully and harmoniously woven into the tissue of the novel. The motif of an unfinished story, introduced through a banal landscape, a table, belongs to postmodern poetics. The nature of narration, creation, for this writer is a necessity, outwitting life, postponing the end. With his short novels, inspiring for many different interpretations, Šajtinac has shown that he is a great Serbian story-teller of outstanding artistic value.

Radivoj Šajtinac, once again, but this time in a different way, with his free-verse novel arranges the debris of experience and memories, scattered and buried in the foggy spaces of past days. He puts together with his wondrous poetics the broken fragments of the porcelain pot of life, playing ironically, sometimes angrily, sometimes sticking a sharpened fierce pen where it hurts most.

The novel Porcelain is a personal hiding place, a tabernacle holding the lived and unfulfilled desires stored, where, under the ash of burned down days, it preserves the lived out beauty and anxiety, innumerable moments of enlightenment by little things that the electrical connections in the soul’s synapses are composed of.