Born on 19th September 1947 in Moscow to the family of the political assistant to Molotov and Stalin’s personal interpreter for French, Victor Erofeyev lived in Paris for several years as a child with his parents. Graduating from the Faculty of Philology at the Lomonosov Moscow State University, he went on to obtain an MA in Philology from the Institute for World Literature. Erofeyev’s first articles were featured in periodicals in 1968.
Erofeyev caught public attention with the publication of an essay in the journal Literary Issues about the work of Marquis de Sade (1973) entitled Marquis de Sade, Sadism and the 20th Century. 1975 saw him defending his PhD thesis Dostoyevsky and French Existentialism.
He is the founder of the literary almanac Metropol. In 1979 he was expelled from the Union of Soviet Writers because of his involvement with the samizdat almanac Metropol and his prose was not published again until 1988.
His novel Russian Beauty was published in 1990, first in Paris and then in Russia, and has been translated into more than twenty languages, becoming an international bestseller.
V. Erofeyev’s story Life with an Idiot was used as a basis for an opera composed by Alfred Schnittke, which premiered in Amsterdam in 1992. A year later, in 1993, the same story provided the basis for the film of the same name directed by Alexander Rogozhkin. Besides Russian Beauty, among his works published in Russia, Europe and the USA (where Erofeyev frequently stays as a guest lecturer at universities) are his books of stories, the compendium of literary-philosophical essays In the Labyrinth of Accursed Questions, and the novel The Last Judgment (1996). His works also include Russia’s Fleurs Du Mal, Men, Five Rivers of Life, Encyclopedia of the Russian Soul, Akimudi…
In the period between 1994 and 1996 his collected works in three volumes were published in Moscow, and from 2019 the publisher RIPOL classic plans to publish 14 books of the EROFEYEV COLLECTION: stories, novels and essay.
His autobiographic novel Good Stalin has been translated into a number of languages, including Georgian, published in 2018. His new novel Pink Mouse (2017) is an account of an eleven-year-old girl whose intellectual-emotional capacities are somewhere between Alisa’s and Lolita’s.
2018 saw the publication of his book of literary-philosophical essays The Crack, while Russian Apocalypse – thoughts on Russia, and The Light of Devil – author’s travels around the world, are to be published in 2019.
Erofeyev is the author of a television programme Apocrypha (1998-2011) on the Culture channel, as well as the radio programme Encyclopedia of the Russian Soul (2004-2007) on Radio Freedom.
He has been awarded the V. V. Nabokov Prize (1992), N. V. Gogol Prize (2018) and International Literary Award „Milovan Vidaković” (PROSEFEST, Novi Sad, 2019) for the novel Pink Mouse.
He has been given the French title of the Order of Arts and Letters (2006) and named the Knight of the Legion of Honour (2013), as well as the highest Polish Order of Merit Cross of Commander (2014).
His books published in Serbian include: Ana’s Body and the End of the Russian Avant-garde, (Književna reč, Novi Sad, 1998), Russia’s Fleurs du Mal, (Zepter Book World, Belgrade, 1999); Encyclopedia of the Russian Soul, (Geopoetika, Belgrade, 2001); Men (Plato, Belgrade, 2002); Russian Beauty (Plato, Belgrade, 2003); Five Rivers of Life – Book of Wondrous Travels (Geopoetika, Belgrade, 2003); Good Stalin (Geopoetika, Belgrade, 2004); De Profundis (Geopoetika, Belgrade, 2007); Body (Geopoetika, Belgrade, 2016); Pink Mouse (Geopoetika, Belgrade, 2018). 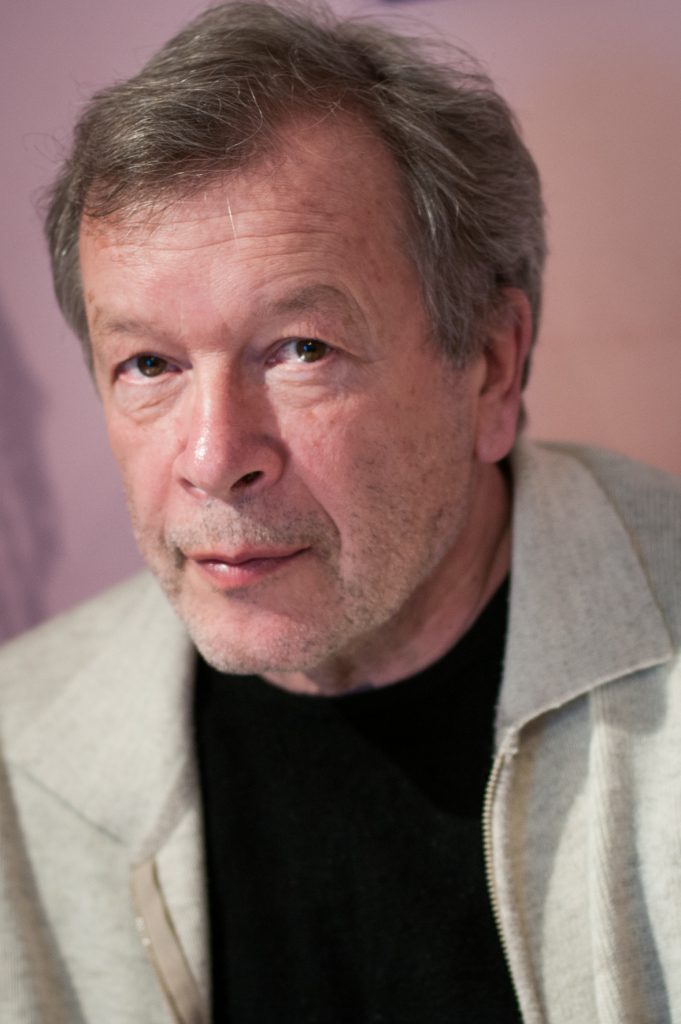 Encyclopaedia of the Russian Soul

Victor Erofeyev, one of the most controversial Russian contemporary writers, writes talented and recognisable artistic prose, at the same time being active as a serious literary critic and theoretician. This combination keeps the spirit of the best Russian literary culture (Rozanov, Shklovsky, Tynyanov), where literature, its theory and history, stand shoulder to shoulder, with their respectable limits imperceptibly merging, complementing and enriching each other.
Working our way through the thicket of Erofeyev’s text, frequently taking issue with his open irony and autoirony, unbridled cynicism and autocynicism, stumbling on drastic references from all stata of life, ideology and art (including lay-bys of the gentlest lyricism, stylistic sufisticaiton and refreshing sprays of bubbling humour), we feel that we are breaking through towards the light, towards the exit from the dark tunnel.

The collection of trans-genre texts entitled Men for the only reason it had to have some kind of a title, while it is actually a freestyle reflection on various topics? Hum, Men is just that, and much more, but primarily a dazzling example of maturity and self-awareness of a flexible mind of an accomplished author coupled with an explosive writer’s talent and that “oh, so Russian” ability to have a deep insight into things from a point of view beyond intellect while staying absolutely true to “realistic storytelling/essayism.”

Erofeyev accumulates witty puns, sharp paradox and (un)imaginable cynicism. He is a creator of a personal philosophical theory, damnism, marking a breakdown and reaching bottom. Such a classical Russian death is overcome by Erofeyev with vital cynicism that is the summit, a symbol of the intellectual superiority of a brilliant analyst of the people and the era he comes from.

Erofeyev has arranged these five “fluvial journeys” with a novelist’s logic into that kind of prose pattern that owes nothing to the novel, but lends it, rent-free, “wings of a story” and a “small parachute” that the novel can fly on and land with in its “dead work” of flowing in and out of one or the other character of the text. That’s why Erofeyev rolls up his travel journals into the scrolls of novel. In its undedicated vials for “analysis” of that which is called the “cement of Russian myth”, or “highway of tears”. That which lurks from the inside, behind the text, for “deathly sorrow and cynical smile” In a certain sense, this is a novel of the post-modernist understanding of the game of, for instance, hide-and-seek, but also a novel about African bureaucracy in fragments. A novel that is read like eating ice-cream or drinking kapibas. All in images of “promised surprises”. And rivers of life, as fields of novel.

This Victor Erofeyev’s novel is perhaps a turning point for what is to come from this author in the future.
The book that gives an account of a family’s (auto)biography, with the surname of the one who has written it. And as much the very motto of the novel attempts to distance it from faction, this simple and excellent motto is untrue! But, let’s attribute it to post-postmodernism.
A parallel story about his own father and the father of the nation (Stalin) is actually the history of the Soviet Union, diplomacy, East and West. The symbolic patricide here equals natural death of the Leader. Father is a gentleman diplomat, by definition, indeed, a regime’s lackey. Son is a member of the opposition, he destroys Father’s career, but shows courage not to accept the regime’s offer of exile, thus paradoxically “saving” them both.
Whether this was Erofeyev’s debt to his father or not, Good Stalin is, all in all, an excellent literary creation, and a study of parenthood (“Can parents be considered people?” author asks.)
In this novel too Erofeyev is, perhaps less explicitly, an audacious provocateur, but also a subtle psychoanalyst who found his escape in literature a long time ago as well. In short – less confrontation, more compensation. Especially in emotions.

Building the novel (autobiography) on the motif of a father-son conflict, fundamental not only for Russian literature (Turgenev, Dostoyevsky, Bely), but also for major currents of contemporary prose writing (in which philosophy is substituted by psychoanalysis), Erofeyev is, as always, a storyteller, critic and theoretician at the same time. Re-examining the relationship between (historical) true and (mythologizing) fiction in culture and politics, as well as in human mind, he devises memories using fictitious events. “With a piece of mirror from Andersen’s fairy tale at heart, this Slavic literary Diogenes, an expat in love with an inexistent Russia, examines everything through a Swiftian magnifying glass of monstrosity; he is a paradoxical artist, simultaneously clever and blinded, attractive and unbearable.

This indispensible novel, a masterpiece of a powerful author’s maturing, is also a kind of sequel to Encyclopaedia of the Russian Soul, as it picks its sensitive spots and historical burdens again; Erofeyev writes, for example, about why “Russian soul” still, deep inside, idolises the cruel Georgian dictator, and is a very educative text for our part of the world… Indeed, the Soviet Union is long gone, but “Soviet man” is still here, together with this colourful Balkan version. This system toyed with individual human destinies with oriental ease: it was horrible for living in, but writers like Erofeyev have succeeded in transcending these accounts about enumerable and almost nameless “straws in the whirlwinds” into the literature written by no one else and nowhere else, a kind of literature that probably cannot be written without the experience of being a guinea pig in a mad historical Experiment.

Good Stalin is undoubtedly a novel that will earn Erofeyev new fans. The novel, which is a picaresque melange of autobiography and fiction, where author spares neither the hero and his parents nor the reader, is unique in Erofeyev’s opus, as well as in the contemporary Russian literature.

In an artful coupling of fantasy and reality, Writer does not hide his interventionist presence. Quite to the contrary, in the most delicate moments in the plot, he teleports the reader into the storyteller’s brain almost cynically demonstrating the technology of designing the story. This sudden presence brings the reader in the position to cut into the theatre backdrop with his nose…
But instead of dream-like landscapes – he is met by a denuded provocation of a nightmare.
One could conclude that today’s Writer lives off his heroes frustrations. Read the final sentences of these stories: (each) hero has (almost) died!

A lot has changed since 1979 when Victor Erofeyev, one of the founders of the literary almanac Metropol, was expelled from the Union of Soviet Writers, but despite this he has remained an enfant terrible of Russian literature, set on surprising the readers with his prose time and again. He remains true to himself, refusing to fit into the literary mainstream, managing to keep his old fans, who love him for his very rebellious spirit and disobedient word and thought, and attracting young readership of the 21st century.
Erofeyev is still amusing, keen-witted, sharp-minded and -tongued, a master of short form, who, while staying true to himself for decades, keeps shocking conservative public opinion and shaking the bears’ cage with his verbal jabs.

Pink Mouse is a book that follows the journey of the heroine, a girl called Marusia, through a fantastic world where she finds her escape from the reality threatened by her parents’ divorce. Like the rabbit and Carroll’s Alice, Pink Mouse leads Marusia into the parallel universe where she will walk an initiation path on her road to maturity. (And go through a figurative death gate marking her transition to the world of adults.) Particularly lively and witty dialogues are undoubtedly one of the best qualities of Erofeyev’s style, brimming with ironic nonsense humour typical of Russian literature, coupled with dynamic contrasts of imagery from reality and everyday life on the one hand, and the twisted world “on the other side”.